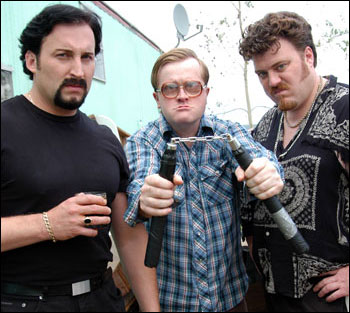 "Listen, Ricky, you're only at school for one reason, and that's to sell drugs."
—Julian
Advertisement:

The show revolves around Julian, Ricky, and Bubbles, two career criminals and their orphaned childhood friend, respectively, and their misadventures as they pursue various get-rich-quick schemes besides growing and selling weed. Once in a while they branch out into legitimate business, usually for misguided reasons or with illegal methods.

The three are constantly at odds with the drunken trailer park supervisor (but not owner) Mr. Lahey and his sidekick Randy. Mr. Lahey, an ex-cop, is determined to send the boys back to jail permanently and thereby regain his lost standing, while balancing his alcoholism and the destruction of his personal life. Also residing in Sunnyvale is Lucy, Ricky's on-again-off-again girlfriend and mother to his daughter Trinity; Cory and Trevor, roommates used as lackeys and scapegoats by the boys; Ray, Ricky's father and a fake paraplegic; and J-Roc and T, two would-be rappers.

The show is considered to be a classic of Canadian culture, and the fact that the show received funding from the Canadian government is testament to its following, as is the fact that the likenesses of the Boys can be seen in bars and public attractions across the country.

Following a mishap with mushrooms at the end of season 12, the show became animated and is now Trailer Park Boys: The Animated Series.

The original seven seasons aired in Canada on Showcase Television; the show was picked up by Netflix who produced an additional five seasons plus several movies and the animated series. Several characters also make their own shows on the side, available on the SwearNet website

(though most of the episodes are locked behind a paid subscription).