A Fool and His New Money Are Soon Parted 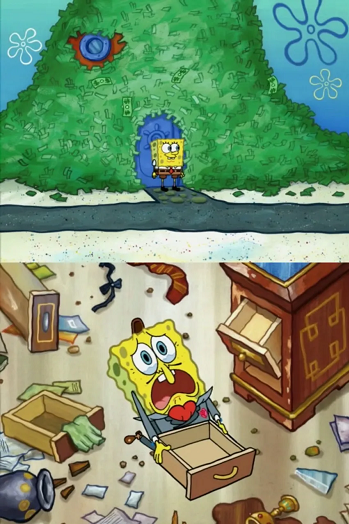 A plot where one non-rich character has a huge and very sudden increase in expendable income, then proceeds to waste it all. This gain in fortune might be for any reason, such as winning a lottery, inheriting the fortune of a rich friend or a long lost family member (maybe On One Condition...), getting a better job, criminal enterprise, inventing the latest popular gadget, a Get-Rich-Quick Scheme that actually works, or even because something was delivered to the wrong address or a computer glitch suddenly put a extra few zeroes on their bank balance. Simultaneously, however, they are handed the Idiot Ball.

Almost invariably, Acquired Situational Narcissism makes the character start to act like an Upper-Class Twit or Nouveau Riche, spend like there's no tomorrow, mindlessly buy "whatever it is that rich people like", blow off their former friends as has-beens, etc. The Intimidating Revenue Service and distant relatives never heard of before or since may also demand their share of the character's winnings. Within a few days, one of the following happens:

At that point, the character is sincerely worried about their future and the people they left behind, perhaps for the first time in their life. They are now so low that a life in Perpetual Poverty is starting to look good to them, having insulted their old friends, quit their old job, etc., they are likely on the streets. Expect the character to be Easily Forgiven (perhaps being made to squirm a bit first); their friends blow it off as completely unimportant, their old boss hasn't been able to find anyone willing to apply for their old job, the person they sold their old house to is moving out of the area and sells it back to them, and the collection agents go home. In shows where Status Quo Is God, the episode's end will have the character's lifestyle restored to exactly what it had been before. If not, there may be a surprise twist that leaves the character with something after all, perhaps something that couldn't be had for All That Glitters. If a character's life isn't restored at the end, they've gone from Riches to Rags.

There is an element of Truth in Television to this trope. An unfortunately common story among real-life lottery winners (to take one example) who suddenly come into a massive windfall is that they are often so unused to having and managing a large amount of wealth and are often so flush with the elation of having a seemingly unimaginably large amount of money that they don't realise how quickly they're able to spend it or the other financial commitments (such as taxes) that come with it. As such, they've often ended up right back where they started or even worse off; sadly, unlike in fiction, many of these tales don't have happy endings.

Subtrope of Easy Come, Easy Go. Opposite of Broke Episode.

Thanks to SpongeBob throwing his money away like that to all those moochers, he is completely broke within seconds.

Thanks to SpongeBob throwing his money away like that to all those moochers, he is completely broke within seconds.