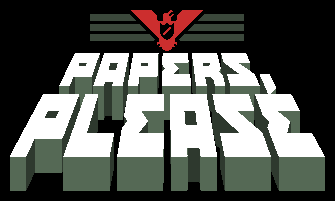 "Here you go. P-please let me in, I've waited for hours."

"To read the article."

Papers, Please is a self-styled "Dystopian Document Thriller" game developed by Lucas "dukope" Pope. You play as an unnamed border inspector whose job is to defend the Authoritarian, Bureaucratic, and Communist nation of Arstotzka from smugglers, spies, terrorists, other criminals, and anyone else who happens to have improperly filled out paperwork. You have a family dependent on your wage to keep them warm, healthy, and alive. You can follow its devlog here

After a shortened version of the game served as a beta for several months, the full game was released worldwide on 8 August 2013. A port for the PlayStation Vita was formally announced in August 2014 and released on December 12, 2017, while an iPad port was released on December 14, 2014. However, a misunderstanding with Apple caused a censored version to be uploaded to the app store; the game was reuploaded uncensored a day later.

, a simpler game about running a newspaper in a totalitarian state.

It has received a short film adaptation (in Russian, though all onscreen text is English and there are subtitles in over 20 languages, including English), which can be streamed from Steam here

Compare Beholder and This War of Mine. Lucas Pope followed this game up with Return Of The Obra Dinn in 2018.

Glory to Arstotzka for containing examples of the following tropes:

open/close all folders
Tropes #-G
Tropes H-R
Tropes S-Z
Tropes pertaining to the film
"It says here that you are to view the article all week."