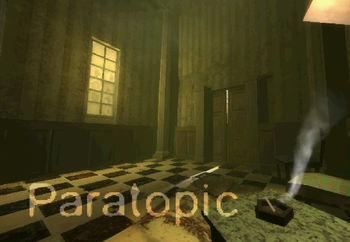 Paratopic is a short, experimental atmospheric horror game developed by Arbitrary Metric and released for PC on Steam and itch.io on 6th September, 2018. It tells the story of three different people in different times and the same place. One is a smuggler bringing VHS tapes across the border. Another is a birdwatcher. And the third is an assassin.

...and that's all we can really tell you. Due to being a short experience, Paratopic is better left experienced. The whole thing takes about half an hour or so to complete. As such, all spoilers will be untagged. You have been warned.

You should check out these tropes, friendo. It's for your own good.