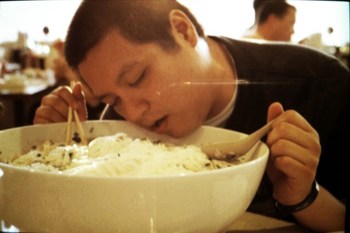 , also known informally as a food coma or the itis, is where someone becomes drowsy after eating, particularly following a big meal.
Advertisement:

Scientifically, there are a number of reasons why this happens, from activity inside the body to the production of insulin. In fiction, however, a food coma is typically a result of pigging out on food, particularly fatty foods like meat. There is a biochemical case for this portrayal too; meat contains tons of protein, and when this is broken down, one of the amino acids obtained is tryptophan. This amino acid, among other functions, is crucial for the production of the hormones serotonin - the feel-good hormone - and melatonin. Both hormones are utilised to help you relax and sleep, so it makes sense that eating foods rich in tryptophan would help you drop off.

This is a common Sitcom trope; it invariably comes into play in a festive or holiday episode, when the family have just had the major annual blowout (Thanksgiving in American sitcoms, Christmas in British) and the camera pans around a room full of comatose and happy people. Farting or Faceplanting into Food may be added for extra laughs.

Needless to say, this is Truth in Television. See Acid Reflux Nightmare, Balloon Belly, and Death by Gluttony for other negative effects of eating too much. Compare with Brain Freeze for another type of negative consequence after eating.