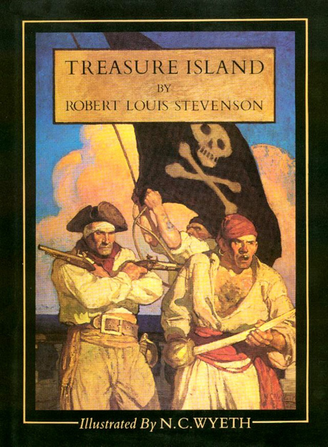 Treasure Island, written by Robert Louis Stevenson in 1881, is a classic tale of pirates and buried treasure, which created many of the pirate tropes, including

In the book, Jim Hawkins, an ordinary (although quick-witted) lad, discovers a treasure map among the effects of a deceased resident at his family's inn. He shows it to two local gentlemen (a landed noble and a wealthy doctor), who charter a ship to search for the treasure on Treasure Island, but they hire sailor-turned-tavern-owner Long John Silver as their cook, unaware that he is a pirate. Long John becomes Jim's mentor, while winning over most of the crew — who he helped hire.

By chance, Jim overhears Long John's plotting, and warns his friends, just as they arrive at the island. Over the next few days, Jim repeatedly wanders into danger, meets a scary hermit and kills a pirate by himself, while Long John keeps switching sides, and the treasure is found.

Jim and his friends return home rich, Long John escapes with some of the treasure, and the rest of the pirates get marooned on the island or killed.

Although originally published chapter-by-chapter in a magazine, when published as a book it became very popular, the British Prime Minister Gladstone staying up until two in the morning to finish it. It is also the ultimate inspiration for all the subsequent pirate movies and other novels, down to Pirates of The Caribbean. Many of them include a Shout-Out to Treasure Island. E.g., in Peter Pan, it is said that Captain Hook was the only man Long John Silver ever feared, while Pirates of the Caribbean: Dead Man's Chest features the "Black Spot" (in a flashier form) and the song quoted at the beginning of this entry.

Tropes from adaptations that don't have their own pages: