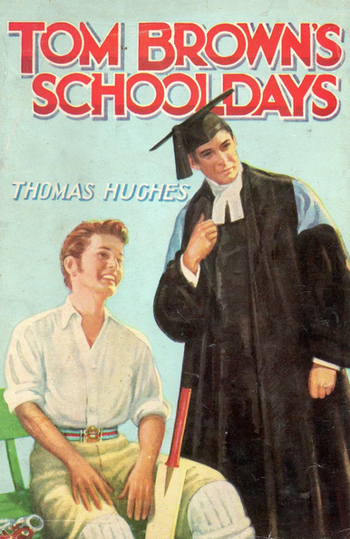 Tom Brown's Schooldays, written by Thomas Hughes and published in 1857, is one of the classics of the Boarding School genre. The main character is eleven-year-old Tom Brown, the son of a well-to-do country squire.
Advertisement:

The early chapters of the novel deal with Tom Brown's childhood at his home in the Vale of White Horse. Tom Brown's first school year was at a local school. His second year started at a private school, but due to an epidemic of fever in the area, all the school's boys were sent home, and Tom was transferred mid-term to Rugby School, where he made acquaintance with the adults and boys who lived at the school and in its environs. On his arrival at Rugby, Tom Brown is looked after by a more experienced classmate, Harry "Scud" East. Soon after, Tom and East become the targets of a bully named Flashman.

In the second half of the book, Dr. Thomas Arnold, the historical headmaster of the school at the time, gives Tom the care of George Arthur, a frail, pious, academically brilliant, gauche, and sensitive new boy.

The book has been highly influential, creating the Boarding School genre which also includes well known works such as Goodbye, Mr. Chips and the Harry Potter series.

Parodies include "Tompkinson's Schooldays" in Ripping Yarns, "Tim Brown's Schooldays" in I'm Sorry I'll Read That Again, the first episode of Bleak Expectations and the boarding school sequence in the Discworld novel Pyramids.

George MacDonald Fraser has written an entire series purporting to reveal what the bully Flashman got up to after he left school.

Not to be confused with the controversial Japanese Anime called School Days.