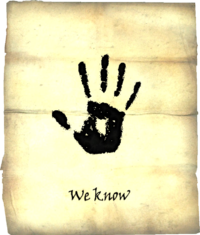 Someone is happily living out his life — frequently a Cool Old Guy or Older Sidekick — until, out of the blue, he receives a cryptic message. It might not even be composed of words; it may be a piece of paper with a symbol, a scratched casino chip or a whistle done by a passing stranger. Few but the recipient knows what it means.

He, however, now knows that the nice people he used to befriend have marked him for death or something equally nasty, and they might be coming in person to enforce it. This was his fair warning.