Film / The Man with the Golden Gun 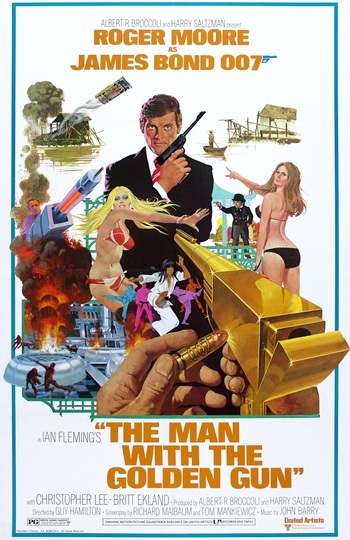 No one can catch him, no hitman can match him...
Bond: Charming trinket. Even has my number on it.
M: Precisely.
Bond: Well, obviously it's useless as a bullet. I mean, sir, who would pay a million dollars to have me killed?
M: Jealous husbands, outraged chefs, humiliated tailors. The list is endless!
Advertisement:

The One With… Christopher Lee driving a flying car.

The Man with the Golden Gun is the ninth film in the James Bond series by Eon Productions, the fourth and last to be directed by Guy Hamilton, and the second to star Roger Moore, coming out on December 18, 1974. Lulu performed the Title Theme Tune.

A loose adaptation of Ian Fleming's novel of same name, the film has Bond sent after the Solex Agitator, a device that can harness solar energy, while facing the famous and dreaded assassin Francisco Scaramanga (Christopher Lee), the "Man with the Golden Gun." The action culminates in a duel between them that settles the fate of the Solex.

Preceded by Live and Let Die and followed by The Spy Who Loved Me.

One of the features of the funhouse is a recording of a deranged version of this.

One of the features of the funhouse is a recording of a deranged version of this.