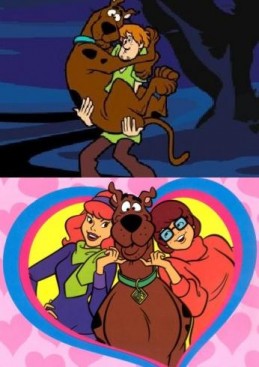 "Some barbarian is waving my shield, since I was obliged to leave that perfectly good piece of equipment behind under a bush.
But I got away, so what does it matter? Life seemed somehow more precious. Let the shield go; I can buy another one equally good."
— Archilochus, responding to the Spartan saying, "Come home with this shield or upon it."
Advertisement:

The flip side of the Dirty Coward is the Lovable Coward. Not quite a hero, completely lacking in heroic impulses, but even as he shamelessly runs and hides we somehow still find ourselves rooting for him. His cowardice is sometimes played for comedy, sometimes portrayed as simply the most sensible course of action; it seldom if ever endangers innocents. The Lovable Coward never (or hardly ever) puts Honor Before Reason - and considers this a point of pride. The Lovable Coward is often The Trickster, specializing in weaseling his way out of dangerous situations. He may be a Cowardly Sidekick; if he is the main hero, he may find himself an Accidental Hero for all the wrong reasons.

Generally, what distinguishes the Lovable Coward from his far more vicious cousin is honesty. While the Dirty Coward acts intimidating and cruel when in control of the situation, only revealing his true yellow streak when he realizes the possibility of being injured or killed, the Lovable Coward admits up front he's not the person you want watching your back in a dangerous situation, and tries to avoid being forced into a situation where others have to suffer for his lack of valor. If his friends get set on going to the Doomed Valley of the Eternal Torment, he advocates that maybe it's a good plan to avoid anywhere in the same country from then on and, if critical that he goes, will actually tag along (heavily armored, and grumbling). If he becomes renowned for his "heroism", the pride never goes to his head, and even if he only admits it internally, he's the first one to openly sing the praises of the actual heroes and may even grow depressed they're not the ones enjoying his fame. Ultimately, the Lovable Coward is never a bully; whereas the Dirty Coward gleefully takes any opportunity to flaunt and abuse any security he has, the Lovable Coward generally takes the opportunity that safety provides to breathe a sigh of relief and enjoy the sensation of death being something very, very far away.

The Galactic Rangers are all robots meant to defend against galactic peril. They are all terrible at it and are prone to panicking, but the game portrays it as endearing.

The Galactic Rangers are all robots meant to defend against galactic peril. They are all terrible at it and are prone to panicking, but the game portrays it as endearing.