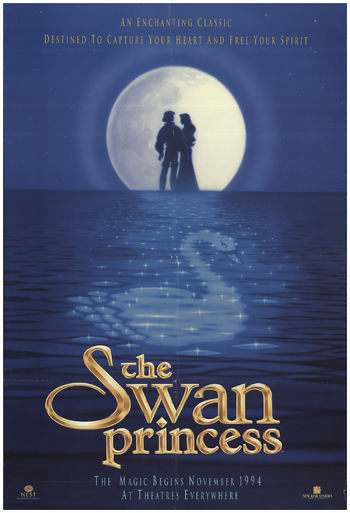 "Far longer than forever, I'll hold you in my heart."
Odette: Will you love me, Derek, until the day I die?
Derek: No. Much longer than that, Odette. Much longer.
Advertisement:

Ex-Disney animation director Richard Rich made this animated feature in 1994, which adapts the plot (though not the music) of the ballet Swan Lake.

Odette and Derek are betrothed royalty of neighboring kingdoms, though it isn't until they're grown that they fall in love. Too bad that first, Derek doesn't know what he loves about her besides her beauty, which upsets her, and second, the evil Rothbart — banished from her kingdom years ago for practicing the "Forbidden Arts" — kidnaps her.

When she refuses to marry Rothbart and make him king, he curses her to become a swan during daylight hours and moonless nights. The remorseful Derek seeks and finds her, but with Rothbart staying one step ahead of the lovers — and One-Winged Angel, too — invoking the Curse Escape Clause is not easy, even with Talking Animal friends helping them out.

The film wasn't a blockbuster. However, it did exceptionally well when it was released on home video, so much so that it spawned multiple sequels, all of which have been Direct to Video. After a 14-year hiatus, a new series of sequels began production, this time being made in CGI instead of 2D animation:

Odette, Derek, and their friends are pitted against such foes as old acquaintances of Rothbart, his ghost, and even The Forbidden Arts themselves in the first four sequels. A Royal Family Tale grants the couple an adopted daughter, Alise, who becomes the protagonist in Princess Tomorrow, Pirate Today and Royally Undercover.

And up through the fourth installment, poor Odette keeps getting turned into a swan and back again the whole way.

a possible Live-Action Adaptation of the first movie.

This film (and its sequels) contain examples of:

What else is there?

Puffin and Speed try to convince Whizzer, through song, to be on the right side.

Puffin and Speed try to convince Whizzer, through song, to be on the right side.