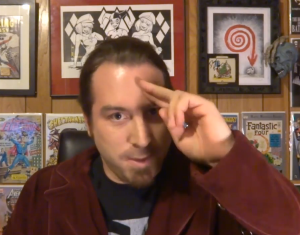 Hey guys.
Robert Thomas, better known as Bobsheaux on various sites, is an internet artist and reviewer. His reviews are mostly about comics and films.
Advertisement:

He started his career when he did a review on Batman: Through the Looking Glass.

Some of his famous reviews and Top Ten lists are...

He also started his own comic book series known as "Cadaver Hills", which you can buy online.

This person provides examples of: