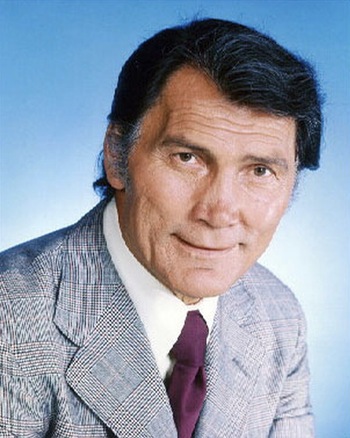 "I go to see maybe seven films a year at the most, and since I only go to see the best, it follows that I very rarely see my own."
Advertisement:

Palance made a career out of playing heavies, usually without a heart of a gold. As one Time magazine critic put it, while reviewing his performance in Shane: "His face alone, as thin and cruel as a rust-pitted spade, is enough to frighten a strong man; and to make matters worse, he seems to emit hostile energy, like something left overnight in a plutonium pile."

He received Best Supporting Actor Academy Award nominations for Sudden Fear (1952), Shane (1953), and City Slickers (1991), finally winning for the latter. During his acceptance speech, the 73-year-old actor memorably performed a series of one-handed pushups on stage to the delight of the audience.

If you're wondering about his birth surname, writer Chuck Palahniuk is indeed a (distant) relative.