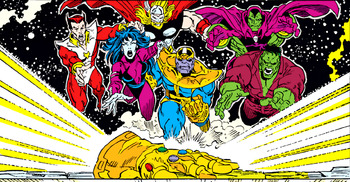 The MacGuffin of Infinite Power is on the floor, a pair of feet away. Who will take it first?note None of them. Starfox will stop Nebula, Thor will stop Thanos, and Drax will stop Hulk (forgetting that they are on the same side). The race continues in slow motion as they try to reach the Gauntlet; and then Adam Warlock will appear and retrieve it.
Advertisement:

There is an important MacGuffin that two or more characters want. One character manages to get their hands on it, and now they need to escape. Unfortunately, now everybody is after their ass, and they won't stop until they get it. In fact, they probably will get it, in which case, the hunter now becomes the hunted, as this character must flee, before the others snatch the MacGuffin back from them.

Often the reason the character opt to run instead of fight is due to a time crunch. They can't afford to take the time to fight, or no-one is strong enough to beat the other without getting badly injured. Perhaps they are evenly matched as fighters, but the object may allow to make the difference. Or maybe there a just so many people involved in the chase, it's impossible to keep track of all the players. Expect the aforementioned MacGuffin to trade owners numerous times. Sometimes one person finally comes out on top, and claims the prize, but - often due to all the fighting - it is destroyed either due to someone dropping it by accident, or one person deciding that destroying it is better than letting the enemy claim it.

In some older cartoons, it would often have one character running off with the MacGuffin, only to have another character coming from the opposite direction run by, and snatch it out of his or her hands, only to have someone else do the same to them. That is when they don't just stick out their foot and trip the other character. This is usually done in the more humorous stories.

A Sub-Trope of Chase Fight, with a bit of Cat-and-Mouse Boss thrown in, with the twist that rather than getting a power up that makes the boss run from you, you claim an object that means now you have to run from him. Will likely either be the result of, or caused by a Mêlée à Trois. Also see Crowd Hockey, particularly for when the melee takes place in crowded areas, as well as Loot Drama. Compare Stolen MacGuffin Reveal, where the MacGuffin is only stolen once (twice, tops). Overlaps with Apple of Discord, particularly if the MacGuffin is deliberately set as bait to start a fight, and can overlap with Fighting Across Time and Space when teleportation is involved. A Slippery MacGuffin lends itself especially well to this trope.