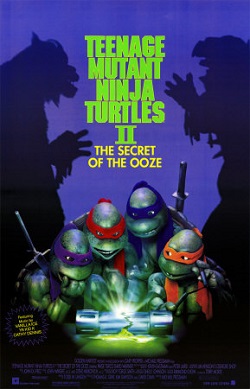 Teenage Mutant Ninja Turtles II: The Secret of the Ooze is the 1991 sequel to the original Ninja Turtles film. It is directed by Michael Pressman from a screenplay by Todd W. Langen. It was released on March 22nd, 1991.

The Foot Clan is back, and back at the helm is Shredder, thought dead by practically everyone. Scarred from his dive into a trash compactor, he is out for revenge. Their numbers may be diminished, but they have something to even the odds. Taking a sample of the waste that birthed the Ninja Turtles from the TGRI laboratory, the Foot has two deadly enforcers in the form of Tokka and Rahzar, a mutated snapping turtle and wolf.

Can the Turtles finally stop the Foot once and for all, or will Tokka and Rahzar's strength be too much?

While it was still a money maker, it garnered some criticism from fans of the first film for toning down the violence and adult themes, and although Jim Henson's Creature Shop still worked on the movie, the costumes and animatronics were considered a little inferior, supposedly toning down the gritty detail to avoid scaring children (they still looked just fine, though). Generally considered more like the goofy cartoon than like the edgy comic, the best example of this being Shredder, who went from being a badass to still a bit of a badass but a little more bumbling. Despite these criticisms, it is still considered a guilty pleasure.

This movie was also notable for the one-time character Keno—played by Ernie Reyes Jr—a martial artist/pizza delivery boy who provided some assistance for the Turtles after they saved his hide from a group of muggers. He disappeared from the rest of the movies. Tokka and Rahzar were original characters made for the movie as well, but this would not be the last we would see of them. The mutant duo would appear later in an episode of the original cartoon, the video games Teenage Mutant Ninja Turtles: Turtles in Time and The Manhattan Project, as well as the Intercontinuity Crossover movie Turtles Forever.

Infamous for the appearance of rapper Vanilla Ice, who (in the context of the movie; it was presumably written ahead of time) came up with a rap almost instantaneously when the fight between the Turtles and Tokka and Rahzar wound up at his gig at a club. It also featured pro wrestler Kevin Nash as Super Shredder, the monster that Shredder turns into after drinking the last vial of the ooze.

Also the only Ninja Turtles movie made prior to the 2014 reboot to not feature Casey Jones.

Its story is followed by Teenage Mutant Ninja Turtles III.

"I made ANOTHER funny!"