Stuffed into a Trashcan 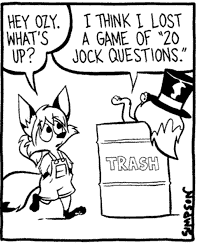 Damn fifth question gets me all the time, too!
Sharon: Being entrapped in a dustbin is traumatic. You don't know what effect it could have!
Tracey: Oh, you mean that's why you've always hung around with rubbish?
— Birds of a Feather, "Baggage"
Advertisement:

Imagine a typical scene where a kid, not necessarily but often times a Nerd or a Geek, meets a Jerk Jock and maybe even his little gang of miscreants in a schoolyard/park/alleyway/etc. The bullies pick on the helpless little guy, maybe even playing Keep Away with something that belongs to him or something, and eventually after beating the poor guy up they stuff him down a garbage can that's conveniently located in the area.

This trope would be Truth in Television as it is done in real life by actual bullies but it is unsure if most of the time in the Hollywood counterpart versions of this trope if this is only played for laughs or if it's mostly done in a serious manner showing how much The Bully overpowers the poor guy (often leading to a mix between Pay Evil unto Evil and Revenge of the Nerd moments or whatever).

A related trope would be Stuffed into a Locker, although this happens much more. This trope has nothing to do with Stuffed into the Fridge.

Sister trope of Swirlie. Compare Garbage Hideout, where a character deliberately hides in a trashcan in order to avoid being caught by people wanting to exact revenge, or sometimes for more mundane reasons such as avoiding chores, or even just to spy on people.

By the way, just so things are clear, Oscar the Grouch is not related to this trope at all.