Film / As Good as It Gets 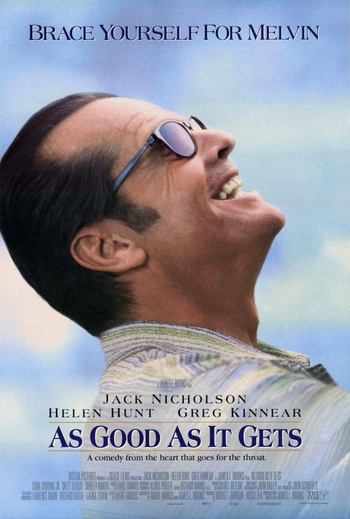 "You make me want to be a better man."
"A comedy from the heart that goes for the throat."
— Tagline
Advertisement:

As Good As It Gets is a 1997 Rom Com from the mind of James L. Brooks, and starring Jack Nicholson, Helen Hunt, and Greg Kinnear. Featuring a relatively small cast, the crux of the story revolves around a reclusive novelist named Melvin Udall: his hostility toward his neighbour, Simon (Kinnear) and his fixation dependence on Carol Connolly (Hunt), a down on her luck single mom with a perennially-ill son. The main characters are as follows:

—Melvin Udall (Nicholson): a reclusive, Obsessive-Compulsive bigot and, in classic Nicholson style, the name at the top of the marquee; Udall also happens to be his publisher's highest-selling novelist (62 books, on par with Stephen King, for a sense of scale), and chronically dependent on waitress Carol Connolly, who waits on him—patiently—in the Manhattan restaurant at which he dines daily.

—Carol Connolly (Hunt): a beleaguered single mom, working a comfortable (if somewhat unfulfilling) waitress job at a Manhattan diner. Melvin's chosen waitress—for little other reason than his OCD-fuelled dependence on her, and, at least in his mind, her willingness to put up with him. Lives with her mother and chronically-ill son, Spencer (Jesse James) in Brooklyn.

—Simon Bishop (Kinnear): Melvin's neighbor. A painter whose two passions in life are his beloved Brussels-Griffon, Verdell, and painting. His dreams get dashed violently when a street ruffian and his friends rob Simon and beat him to within an inch of his life. Hereafter, while Simon's away getting treated, Verdell the dog falls under the care of Melvin—who has trouble adjusting. Then gets over it. Then has trouble dealing with the absence in his life once Verdell goes back to Simon.

From here, Rule of Drama ensues. A James L. Brooks production, with the soundtrack, by Hans Zimmer. Cuba Gooding Jr. plays Simon's manager, Frank. A young Maya Rudolph can be seen briefly as a cop.

The film provides examples of the following: