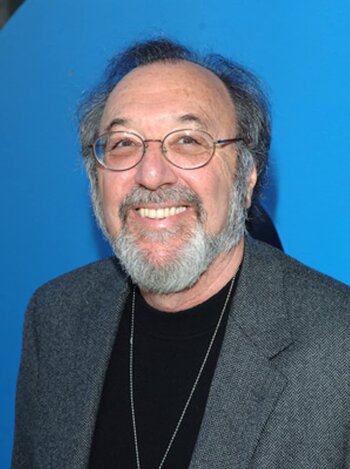 "I think you have a pact with an audience in every picture, and I think the pact is to try and be truthful and to be real."
Advertisement:

James Lawrence Brooks (born May 9, 1940) is an American producer, director, screenwriter, and occasional actor whose works are usually critical hits. He is friends and a frequent collaborator with music composer Hans Zimmer. He also has his own production company, Gracie Films.

Brooks is one of only eight directors to win Academy Awards for writing, directing and producing a film,note The others are Leo McCarey (Going My Way), Billy Wilder (The Apartment), Francis Ford Coppola (The Godfather Part II), Peter Jackson (The Lord of the Rings: The Return of the King), The Coen Brothers (No Country for Old Men), and Alejandro González Iñárritu (Birdman or (The Unexpected Virtue of Ignorance)). accomplishing the triple feat for Terms of Endearment. He was also nominated for producing Broadcast News, Jerry Maguire, and As Good as It Gets and for writing Broadcast News and As Good as It Gets. On the small screen, he's known for helping to create such classic TV series as Room 222, The Mary Tyler Moore Show, Rhoda, and Taxi, and for being one of the executive producers and original creators of the extremely long-running animated sitcom The Simpsons (joining Matt Groeningnote who created the characters and did write a few episodes in its early days, mostly the season one episodes and season three's "Colonel Homer" and the late Sam Simon).

The Vanity Plate takes place in a cinema room where a lady shushes noisy attendees as the lights dim, and the words "GRACIE FILMS" appear on screen while accompanied by a catchy, jazzy, jingle composed by Jeffrey Townsend. On The Simpsons Halloween episodes ("Treehouse of Horror"), the lady's "Shh!" is changed to a scream while the catchy, jazzy jingle is replaced with creepy organ music.

Some people have said that the jingle was inspired by the chorus of the Go West song "The King of Wishful Thinking," but the logo and jingle actually predate the song by a couple of years.

Notable works with the involvement of Brooks and or Gracie Films, or just Brooks:

Made For TV Movies