Literature / Are You There God? It's Me, Margaret. 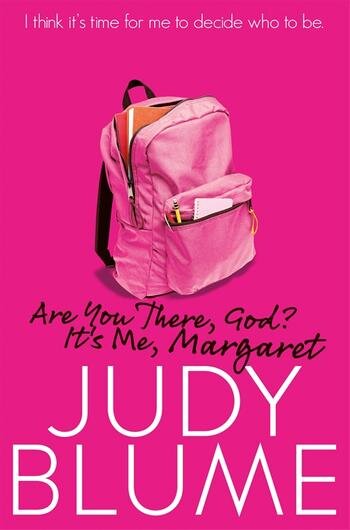 I think it's time for me to decide who to be.
Are You There God? It's Me Margaret. is generally considered to be a Young Adult novel and was written by Judy Blume in 1970.
Advertisement:

It's the 1960s and Margaret Simon, the protagonist of this book, is a sixth-grade girl who is struggling over the issue of faith. Her mother is a Christian and her father is Jewish (though both are non-practicing), but up until that point she considered herself non-religious. It doesn't help that each of her new friends is either Christian or Jewish, and Margaret feels she must make a choice so she can "belong" with one group of kids or the other. She also deals with the issues of growing up and puberty, such as periods, liking boys, getting her first bra and being jealous of girls who grew breasts sooner.

Because it has puberty and the questioning of religious faith as a large part of its subject matter, it was subsequently banned from many school libraries and reading lists.

Nearly fifty years after the book was published, Blume finally agreed to allow a film adaptation of the book to go ahead

. It finished shooting in the summer of 2021 and stars Kathy Bates as Margaret's paternal grandmother, Sylvia.