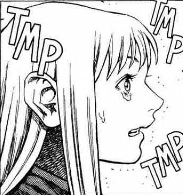 When humans cry, their tears are used to convey various emotions — most commonly, anger, happiness, sadness, and when having a breakdown. But tears also fall if people are scared out of their wits. If this happens, it may or may not be an indicator that they are slipping into insanity or panic as a result of the fear.

Can be used in a serious sense to show a character becoming emotionally broken or a comedic sense to show the character as a big baby. Never used as a form of Manly Tears. For many, this is Truth in Television.

Not to be confused with '80s New Wave band Tears for Fears.