Film / The Passion of Joan of Arc 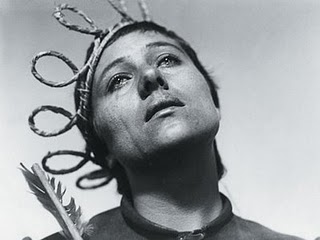 Joan of Arc is put on trial by the English. They attempt to get her to back down from her claims of holy visions. She refuses, and is eventually burned at the stake. The film's plotline is highly conventional, being adapted straight from the actual records of Joan of Arc's trial, and essentially serving as a highly condensed version of the real event. The film's real strengths come in the form of Dreyer's excellent direction, Falconetti's performance, and the fact that you'll barely be able to see either of those things though all of your tears.

Famously, this film survives only due to one single copy which was found in a closet in a Norwegian insane asylum. How strange is that?