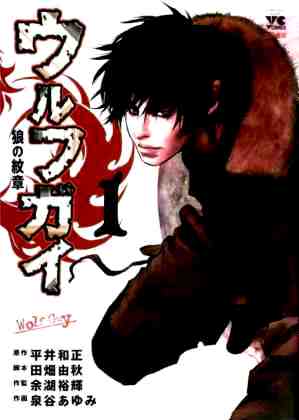 Wolf Guy - Wolfen Crest is a Seinen manga by Tabata Yoshiaki and Yugo Yuuki, the same guys behind Akumetsu. Like Akumetsu, it's a pretty violent series with a mysterious male protagonist, though with a more supernatural bent.

, however, Wolf Guy Wolfen Crest is actually one of the many remakes of a short shonen manga from The '70s, originally written by Kazumasa Hirai and illustrated by Hisashi Sakaguchi, but it takes a few notes from Hirai's later novel entitled Adult Wolf Guy as well. The manga even had a Lighter and Softer OAV series in the very early nineties, with famous seiyuu Toshiyuki Morikawa voicing the male lead, Inugami Akira (Here's the OP, by the way,

). Yuuki and Tabata took the basic concept of the oldie manga and re-set it in modern times. The manga also had a live-action adaptation by Toho, with Godzilla director Jun Fukuda directing and Riichiro Manabe providing one of his best scores. An Adult Wolf Guy film was later made by Toei starring Sonny Chiba.

The story goes like this. Akiko Aoshika, a beleaguered and incredibly hot middle school teacher, is stumbling home from an evening at the bar after another day of hell at work. She comes across a young man, Inugami Akira who keeps her from falling flat on her face. After arguing back and forth about her being a teacher or not, he tells her to beat feet, for a storm's a brewin'...

Unsurprisingly, Aoshika follows him anyway, whereupon he walks smack into a large gang. They proceed to beat the tar out of the boy, while the teacher looks on in horror. Not that it matters, as he springs back up five minutes later. The gang leader decides to be more thorough and employs Car Fu to take the boy down. This seems to work so they turn their attention to Ms. Aoshika, who is in the early stages of Heroic BSoD due to flashbacks of her own troubled youth. Eventually she just faints. When she wakes up, all of the gang members have been beaten up and she is completely unhurt.

Flash-forward to the next day, where she is dropped off at the school by the police. By the way, guess who's her new transfer student?...