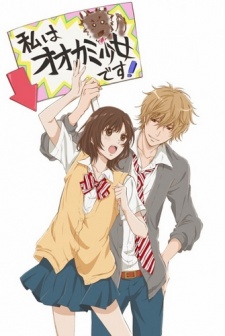 Erika Shinohara, an Ordinary High-School Student, is often jealous of her friends' boyfriends - so she lies about having one herself to be a part of the group. When her friends become suspicious of her having an actual boyfriend, she claims a handsome boy in the picture on her cellphone is her boyfriend (she actually just took a random picture of the guy on street).

The story gets interesting when said guy in the photo happens to be a classmate! And not just an average classmate, but the school prince, Kyouya Sata!

Overhearing the conversation, Kyouya proposes the idea of becoming fake lovers with Erika under one condition: becoming his dog.

Okami Shoujo to Kuro Ouji, roughly translated as "The Wolf Girl and The Black Prince", is a shoujo manga by Ayuko Hatta which was serialized in the monthly magazine Bessatsu Margaret from 2011 to 2016, wrapping up with 16 volumes and 58 chapters, not counting extras.

An anime adaptation by TYO Productions aired during the Fall 2014 Anime season for a total of 12 episodes, with an OVA later bundled with one of the manga volumes. The anime adaptation can be watched legally at Crunchyroll. The series has also been adapted to live-action, released on May 28, 2016 (two weeks after the manga ended) and starring Fumi Nikaido as Erika and Kento Yamazaki as Kyouya.