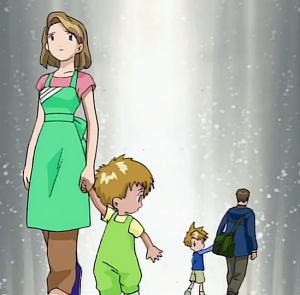 "They must've quarreled and parted; and just sort of ... bisected us, each taking one of us."
— Sharon, The Parent Trap (1961)
Advertisement:

Parents divorcing is often a stressful time for all involved. Among other things, one of the primary issues is which parent raises the children. This can turn into a very ugly battle in which both parents do their damnedest to ensure they get full custody of all the children.

In fiction, another solution is sometimes agreed upon: the parents split the kids down the middle, á la the biblical story of Solomon. When this sort of split occurs, the father will get the sons or older children while the mother gets any daughters or younger children. This can and will occur regardless of one parent's skill, or even suitability, to raise a child.

This split will often cause drama between the children, since a Solomon Divorce seems to also require that they never actually see one another again, even if they vehemently cried "Don't Split Us Up".

The trope is a lot more common in fiction than reality. Children are (almost) never split up in a divorce with the possible exception of half- or step-siblings. That said, this does occur in certain circumstances; in the legal terminology, this is usually called a "split parenting situation" (and even then, the law makes it mandatory to at least recommend visiting times and/or therapy for the child).

Named after the Judgment of Solomon, except in that case there was only one child and the whole thing was a ruse in any case. Can easily be seen as Values Dissonance, since within the setting this is almost never looked upon as all that unusual. Compare Separated at Birth for examples of when these siblings were separated by other factors and Taking the Kids for when custody is more unilateral.