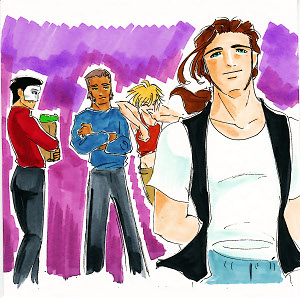 Our main cast of lovable misfitsnote (From left to right: Erik, Javert, Jareth and James).
"Somewhere, there is a place where all stories are real and all dreams are truth.
This is not that place.
This is not quite that place, but it's close."
— Narration form "Roommates 61 - Lundi"

Welcome to the Buildingverse! This article is about the Weekly Web Comic (normally updated on Mondays) that started all in 2007: Roommates by AsheRhyder

and the fans on DeviantArt. (Can be found here

. And there are some "official" collected editions: Collection 1

, Such Stuff As Dreams Are Made On

It's mainly about Goblin King Jareth, The Phantom Erik, (ex-)Commodore James Norrington and (ex-)Inspector Javert, who all live together in the same apartment building. Also along for the ride (occasionally) are Crowley, Aziraphale and Legolas and the romantic interests Christine and Sarah and many MANY more as they try to survive each other, life outside of their normal existence and general weirdness.

This building, this town and possibly this whole world is a special place. Sure it looks quite normal on the surface (urban Present Day setting) but how sane can it be if Gandalf teaches science at the local university? All fiction exist as movies / books / etc. and as real places / past for the characters? And there isn't much of a fourth wall either...

There are also Fan Translation projects for this comic:

If you were looking for the unrelated dating sim with the same name that's over here.