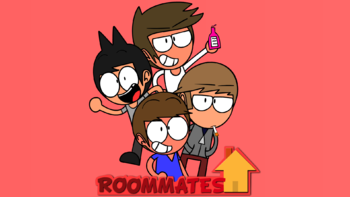 Roommates is a webtoon series created by Joseph Gonzales. It started in 2014 and is about 4 pals trying to live among each other with an Evil Landlord while crazy things happen. The show currently has 9 episodes, 15 shorts and 4 specials. The show is hosted on the YouTube channel Flow Joe, which can be found here,

. The show also has a website containing all of the episodes, comics, and other extras. The website can be found here.

Not to be confused with the dating sim or the webcomic from 2007.