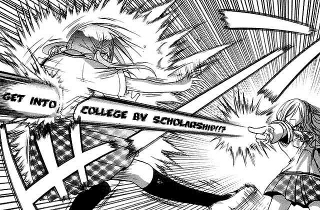 I think she gets the point…
Advertisement:

This is mainly a Manga trope, though it's also used in anime. Someone says something, and the object of the statement is stabbed by an arrow emerging from the speech bubble or legend, because it's almost always an uncomfortable truth or Brutal Honesty. Quite often the person is knocked off their feet. Bonus Black Comedy points if said Annoying Arrows go right into the characters' eyes. Usage:

Aerith: (to Bob) "You're clumsy ("Clumsy" appears — stab), stupid ("Stupid" — stab) and you won't ever have a chance with me!" ("No chance" appears — pierces Bob right through his chest)

They don't have to be arrows. Sometimes heavy rocks, bricks, washbasins, even energy beams with the meaningful words on them are substituted for speech bubbles — anything that'll leave a physical impact on the object of the statement in a Medium Awareness way.

Usually delivered by a Metafictional Device. If the speaker is actually hitting the victim in sync with each word, that's Punctuated Pounding, not this trope. Compare Words Can Break My Bones when the words have some literal magic power behind them, and Armor-Piercing Question when it is a question with a deep psychological effect on its audience. May be used with Oblivious Guilt Slinging. A particularly literalist interpretation of The Power of Language.