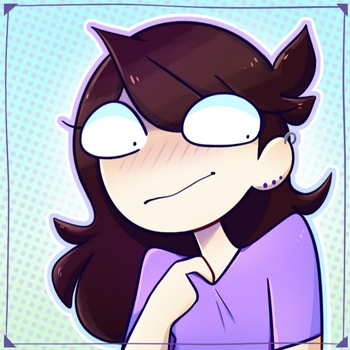 "I have no idea what I'm doing"
— Channel Motto
Advertisement:

Jaiden, born on September 27, 1997, known online as Jaiden Animations, is an Arizona-born "animate-my-life" YouTuber, much like Domics, Katzun, Tabbes and TheOdd1sOut. She is also one of the biggest YouTube animators on the site.

Much like them, she covers stories from her life, as well as general small fun facts about herself and then animates them for a YouTube audience. Her videos cover a range of topics like stories about her parents, vacations, her fears, random thoughts she tends to have and her experiences with instruments and reality TV. Along with that, she also does collaboration videos with other YouTubers like TheOdd1sOut and Draw with Jazza, has collaborated with Game Grumps in several multiplayer games and toured with in live drawing events (with Egoraptor and Ross O'Donovan in particular), and has occasional vlogs with her pet bird Ari and has even made a collection of "I Has Cupquake Animated" videos, which can be seen on her channel.

Jaiden's channel can be found here

and her DeviantArt can be found here

Not to be confused with Chinese studio Jade Animation.