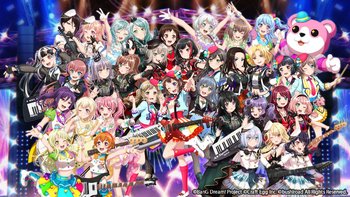 BanG Dream! is a Japanese multimedia franchise created by Bushiroad, focusing on the fictional band Poppin' Party. The first manga began in January 2015, followed by two more in 2016, and in January 2017 an anime adaptation produced by Xebec began airing. Sentai Filmworks has licensed the anime for an English release, and Crunchyroll is simulcasting the series. The name comes from taking the "G" of "Girl" and putting it in place of the "d" in "Band". Therefore the title is basically a stylized form of "Girl Band Dream!".

Kasumi Toyama is a high school girl who wants to find something she can be passionate about. When she attends a music performance at a Live House, she finally realizes that's the "star beat" she's been seeking and decides to form a band.

A tie-in game, BanG Dream! Girls Band Party!, was launched in March 2017 in Japan and one year later worldwide, developed by CraftEgg and published by Bushiroad. In addition to Poppin'Party, it features four other bands: Afterglow, Pastel*Palettes, Roselia, and Hello Happy World!.

The success of the franchise has led to the anime being renewed for two additional seasons and a series of spinoff animated shorts, Pastel Life, that focuses on the daily lives of Pastel*Palettes' members. Another series of shorts, Girls Band Party! PICO

For tropes specific to the mobile game, go here.

For the spin-off series focused on male bands, see ARGONAVIS from BanG Dream!.