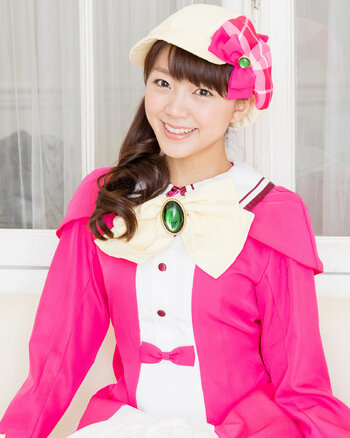 Suzuko Mimori is a Japanese seiyuu (born June 28, 1986) who first became noticed as Sherlock Shellingford of the Tantei Opera Milky Holmes quartet, and is now most famous for her role as Umi Sonoda in Love Live! She's a bit of a Cosplay Otaku Girl and loves to dress up as her characters, as well as a successful singer (both as her characters and as herself). She's Relationship Voice Actors with Sora Tokui, as both frequently show up in Bushiroad-produced anime, and to a lesser extent with Yoshino Nanjo and Izumi Kitta. Her fan nickname is "Mimorin", and her special skill is dancing (mostly Western: tap, jazz and ballet).

In January 2018, Japanese paparazzi broke the news that she was dating New Japan Pro-Wrestling superstar Kazuchika "The Rainmaker" Okada. The couple confirmed it on Twitter a few days later, also disclosing that they had been together since the summer of 2017. On April 12, 2019, she confirmed on her blog that they got married. In 2022, they announced that they were having a child.

Mimori is bilingual in English and Japanese.