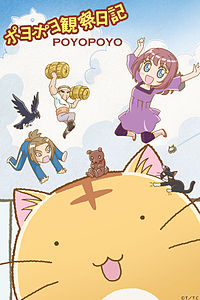 Poyopoyo (Poyopoyo Kansatsu Nikki, "Poyopoyo's Observation Diary") is a Slice of Life manga by Rū Tatsuki about a spherical cat named Poyo who is discovered and adopted by a young woman named Moe. Much cuteness ensues.

The manga was serialized in Manga Life MOMO from 2003 to 2016. A 52-episode anime was made in 2012, in two minute episodes which can be viewed on Crunchyroll here

Not to be confused with Puyo Puyo. Has nothing to do with Kirby, either, though the title character is voiced by another Nintendo icon's voice actress.