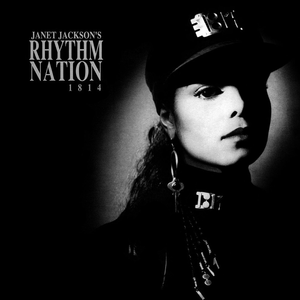 People of the world unite
Strength in numbers we can get it right
Drugs and crime spreadin' on the streets
People can't find enough to eat
Now our kids can't go out and play
That's the state of the world today
—"State of the World"
Advertisement:

Following the insane success of Control, Janet decided she wanted more creative control for her next album. She also decided she wanted to make a difference, just as her brother Michael had with some of the songs on his latest album, Bad. So she put together a Concept Album that would explore racism, drug abuse, and poverty. It would not be devoid of more romantic and optimistic songs, though.

For this album, she continued to produce a lot of her songs with Jimmy Jam and Terry Lewis. But in addition to her New Jack Swing, she added in some more industrial (specifically the title song itself, "Rhythm Nation"), and even a more explicit dab of the Minneapolis sound. One of the songs, "Black Cat", was produced by Jellybean Johnson. The final CD would have a total of 20 tracks; the vinyl version removed most of the interludes except for the intro and the finale, reducing it to 14 tracks.

Rhythm Nation proved Control was no fluke for Janet, but it would not be without its flaws. While acclaim for the music in general was nigh-universal, the concept part of the album fell flat with some critics, and ultimately did not stand the test of time. Jon Pareles of The New York Times described it as "a cause without a rebellion" while simultaneously praising the music.

Indeed, this album was contemporaneous with the rise of Gangsta Rap, which was generally recognized to tackle Black issues from a more authentic position; a similar attitude would sow the seeds for the downfall of New Jack as a whole. Janet mused about the naïvete of her approach in hindsight; looking back 25 years later, Janet would quip in the song "Shoulda Known Better" from the 2015 album Unbreakable:

I had this great epiphany
And Rhythm Nation was the dream
I guess next time, I'll know better.
Advertisement:

But commercially, Rhythm Nation 1814 sold even more records than Control did; 12 million worldwide, going six-times Platinum in the US. It would be on the Billboard 200 chart for nearly two years, and was the number-one album of 1990 in the United States.

Seven singles were released worldwide from the album: "Miss You Much", "Rhythm Nation", "Escapade", "Alright", "Come Back to Me", "Black Cat", and "Love Will Never Do (Without You)". None of them would peak lower than #4 on the Billboard Hot 100, and four hit #1. An eighth single, "State of the World", was made a promotional single last minute, and was thus ineligible to chart in the US or the UK because of chart rules at the time.

Rhythm Nation 1814 became the first (and currently only) album to produce #1 singles on the Billboard Hot 100 in three consecutive calendar years ("Miss You Much" in 1989, "Escapade" and "Black Cat" in 1990, and "Love Will Never Do (Without You)" in 1991). Its seven top-10 singles tied a record with her brother (Thriller) and Bruce Springsteen (Born in the U.S.A.); they would subsequently be joined by Drake (Scorpion).

Janet promoted the album with her first world tour in 1990, doing 131 shows over five legs from March through November. Most of the shows sold out, and she was the only female solo artist to crack the top ten in concert box office receipts for the year. Four different showings at the international opener of the tour, the Tokyo Dome, sold out in seven minutes, a record for the venue that stands to this day.

It was through the promotional tour that the album would see its greatest social impact. Janet used proceeds from her shows at Madison Square Garden as seed money for Rhythm Nation Scholarship Program, granting scholarships to African American students who sought to study communications or performing arts at universities associated with the United Negro College Fund.

It was selected for preservation in the Library of Congress' National Recording Registry in 2020.

† = Interludes that are not included in the vinyl album.

"All the lonely nights, I troped alone:"