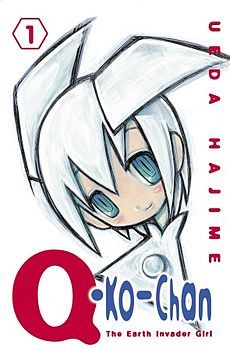 Q·Ko-chan: The Earth Invader Girl is a 2003 manga series created by Promoted Fanboy Hajime Ueda, who also made the FLCL manga.

Q·Ko-chan takes place in a dystopic alternate Earth stuck in an endless war against two alien factions, The Waste Disposal Units, and the so-called Dolls who all fight in a three-sided war. In it's current state, the world has been ravaged by pure hydrogen bombs that has changed the Earth's climate, and in all the carnage a military group called the "Black Hares" staged a violent Military Coup to take over the Japanese government and put it under martial law. Kirio Muji is the son of a Black Hares Major, Ririko Muji, and lives in a small town surrounded by several towers claiming to shield the city from any outside danger. But one day at school, he and his friends bear witness to a Humongous Mecha searching for an address, and escaping from military forces. Kirio's day takes a turn for the worse when he later finds a girl hiding in the bushes outside his house, pleading him to pilot her but collapses from hunger, and Kirio decides to hide her in his closet. He later finds out that her name is Q·Ko and that she is a Welfare Machine from the Universal Child Welfare Organization and is the Humongous Mecha that Kirio saw earlier.