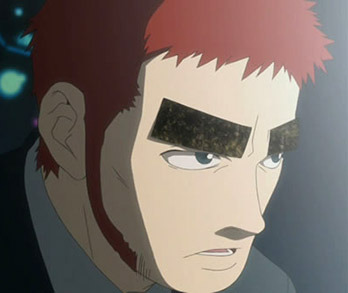 "A hundred and ten percent lady-proof."
"Your eyebrows are bigger than your head!"
—Chris Zito on Kumiko of Corona Blossom, Yes Yes Love Adventure GO!
Advertisement:

An extremely old Japanese artistic convention is giving men bushy eyebrows. The manly oyaji usually has them, and it makes his expressions more imposing and tougher. A lot of older Shōnen manga use this style to great effect. Unless it's specifically part of the art style, Big Ol' Eyebrows are a common Art Shift gag when a character is being overdramatic.

Women tend to get very thin eyebrows. Thicker eyebrows are usually just a convention to make their faces more noticeable or make their facial expressions funnier. But in a few anime, women have thicker eyebrows which resemble long commas. It's the case of Momoko from Ojamajo Doremi and Honoka, Saki and Kurumi from the Pretty Cure franchise.

A Sub-Trope of Unusual Eyebrows. Usually related to Evil Eyebrows. Hot-Blooded Sideburns is a Sister Trope, and often shows up alongside this one. See also Big Ol' Unibrow. Contrast with No Brows.