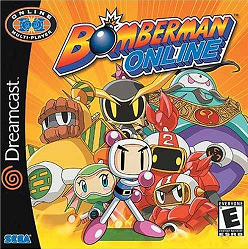 Bomberman Online is a 2001 installment in the Bomberman franchise released for the Sega Dreamcast in North America. As the name suggests, it was made specifically for online multiplayer, introducing new game modes and extras to the series. The online servers were shut down in 2003 with no option for "direct dial" like its cousin Saturn Bomberman, though the game can still be played offline.

There was also a 2004 online PC game released in Japan, South Korea, Taiwan, Hong Kong, and Macau (sometimes called Online Bomberman) which was even closer to the original formula; its various servers would be discontinued between 2003 and 2007. Bomberman Online Japan was also launched in 2008, and the service ended June 2009.