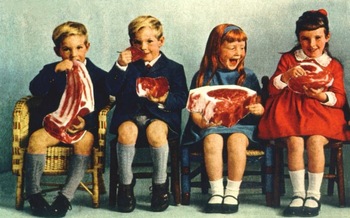 Sam: Lovely big golden chips with a nice piece of fried fish. Even you couldn't say no to that.
Gollum: Oh yes we could. Spoilin' nice fish. Give it to us raw and wrrriggling; you keep nasty chips.
Sam: You're hopeless.
— The Lord of the Rings: The Two Towers
Advertisement:

In certain fantasy and science fiction settings, there will occasionally be meat-eating characters who prefer to eat their meat raw, sometimes even alive, rather than cooked. This frequently marks the characters as more savage and/or animal-like, especially if they are Beast Men who resemble animals that would be expected to eat raw meat. They may also eat raw meat because it is more "macho" to do so.

For otherwise civilized Beast Men, it's often a sign of My Instincts Are Showing. Often overlaps with Jabba Table Manners to further emphasize the character's animalistic nature. Compare Real Men Eat Meat, when eating meat (particularly red meat) is treated as an integral element of masculinity; it often overlaps with this trope when the criteria for "real" meat include "must be raw/uncooked." Compare and contrast Eaten Alive. See also Raw Eggs Make You Stronger.

Whether the rumbling is from hunger or food poisoning from raw meat is still up for debate.

Whether the rumbling is from hunger or food poisoning from raw meat is still up for debate.