Fred: You didn't tell him about me, did you?
Fred's mother: No, I lied and told him you're sane.
—Fred 2: Night of the Living Fred 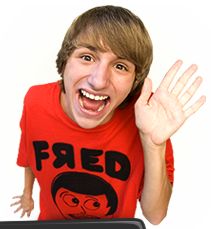 is six years old. (Fifteen in the film series.) He's a cloudcuckoolander keet with a near-lethal case of Helium Speech, his mother an alcoholic drug addict who's practically abandoned her son, his father locked in the slammer, slated for capital punishment. note In the film series, he doesn't know who his father is, so he imagines/hallucinates that it's wrestler John Cena. You know, just like when you were a kid!

Fred was created and portrayed by young comedian Lucas Cruikshank, acting hyperactive and pitching up his voice. That alone created one of the biggest YouTube phenomena of its time, spawning merchandise, music, a TV series, and a trilogy of films. Fred is also one of the oldest phenomena on YouTube, starting around Halloween 2006 (a year after the site's inception), when Cruikshank was only 13 years old. His videos have gained lots of attention, regularly getting tens of millions of views, with his most viral video clocking out at over 70 million views, which is all the more impressive when you consider that this was all back when YouTube's userbase was so small that you could count the number of channels with more than a million subscribers with your fingers. Oh, and speaking of subscribers, Fred was also the first channel on YouTube to hit 1 million subscribers, so there's that.note source

The channel went through some strange phases after Cruikshank sorta retired Fred as his animated equivalent in It's Fred! took over, culminating in the irreversible changes made after the series of universally hated New Fred videos made when the channel was supposedly owned by Yuksung Corporation, a fictional South Korean company. After the channel was "reclaimed" by Cruikshank in a stunt that revealed Fred to be held hostage by Yuksung, the channel started putting out new series of skits that weren't even slightly pertinent to Fred and only gained a fraction of the original Fred videos' views. The channel has since stopped uploading. The closest thing to real Fred content we have nowadays is Cruikshank's personal channel, which can be found here