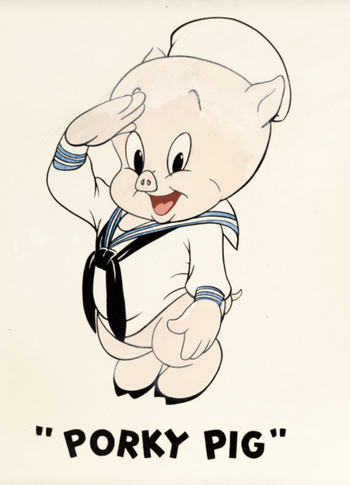 Vyvyan: Bacon Sandwich here is known as a pig ferret.
Guard: Bacon Sandwich? That's a funny name for a ferret.
Vyvyan: Aha, that's why I had you fooled because it's not a ferret it's a pig!
— The Young Ones
Advertisement:

Humans' main relationship with a lot of animals is as a food source. We also like to give animals names. Sometimes the name reflects this relationship.

When used for an actual farm animal, this is an acknowledgement of its fate and a reminder not to get too attached. When used for a pet, it is more ironic, referencing that the animal isn't going to be treated this way. When used as a Funny Animal's actual name, it's just weird. It might also have kind of disturbing implications if you think too hard about it.

Pigs are particularly prone to this, possibly because the English language has a lot of words for pork products.

Subtrope of Theme Naming. Might be a Punny Name if the name is a pun on meat. Compare Edible Theme Naming, A Dog Named "Dog", A Lizard Named "Liz", and Species Surname. Related to Carnivore Confusion.