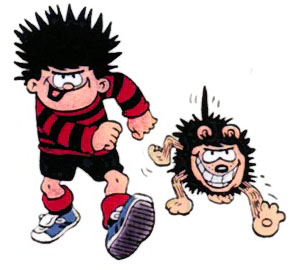 One of two Comic Book characters known as Dennis the Menace, both being primary school-age boys who frequently get into trouble and make mischief, aided by a pet dog, that were first published in March 1951. This page is about the British version as published in the Anthology Comic The Beano.

This Dennis is slightly older than the Dennis from across the Atlantic, 10 years old rather than 6 (though at times he has been portrayed as slightly older again). He also has dark spiky hair and an iconic black-and-red horizontal-striped jumper, and he is joined by his similarly drawn spiky-haired dog, Gnasher. He truly revels in doing naughty or mischievous things and is at odds with his parents, the local police, his neighbours and the "softies" of his neighbourhood.

Unlike the U.S. Dennis, this Dennis actually is a menace, as he is more actively malicious than simply mischievous. If you look at it the right way, it is not hard to interpret his actions toward the so-called "softies" as bullying based merely on the fact that those boys are more effeminate and quiet than he is. This has meant that a manipulative and calculating streak has been given to Dennis' main rival, Walter, in hope of balancing this out.

Dennis pretends to have caught the "Beanotown Cold", but his mother isn't fooled.

Dennis pretends to have caught the "Beanotown Cold", but his mother isn't fooled.