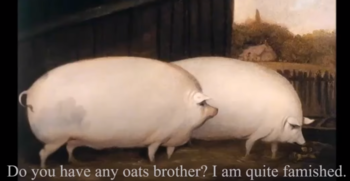 The Oats Series is a slideshow style episodic series by Joe Capo. It follows the tale of two brothers, both pigs, and the trials and tribulations the older brother goes through in his quest to acquire some oats. However, what should be a simple lunch run takes a turn for the surreal as his quest for Oats gets him more than he bargained for, fighting dark conspiracies and Jerkass Gods in his efforts for a simple meal.

The series started out with videos a few minutes apiece (starting with Brother, I Require Your Oats), but culminated in The Oats Movie, which clocks in at a whopping 40 minutes. From there, the Oats series has followed a pattern of around 10 smaller videos between subsequent movies, with the newest being the Oats Movie 3.

As of 2019 Joe Capo has retired from Youtube and deleted all of his videos from his channel, including the Oats Series. Fortunately the Oats Series was archived and can be watched here