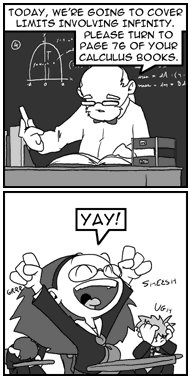 Finally, a real challenge!
Willow: Goody! Study party!
Xander: Will, you need a life in the worst way.
— Buffy the Vampire Slayer
Advertisement:

Fiction thinks that tough schoolwork is the greatest thing ever to a nerd. They go beyond the mere Bookworm in that they live for pop quizzes, midterms, and final exams. Not that they are enthusiastic about subjects they are interested in, but tough work is awesome on its own. Basically, they are portrayed as the bizarro student. Having an extra day of school to these guys is like having a day off from school to everyone else. These nerds commonly suffer from Opinion Myopia, and will be baffled at why their fellow classmates aren't acting like they're meeting a rock star. "Why do you guys look so down? We're having a pop quiz on calculus! Isn't that great?!"

Heck, some nerds might even find these nerds too nerdy.

Is this Truth in Television? Somewhat. Again, people will be glad to learn about things that interest them (especially if they are going for higher college degrees) but there's a difference between being interested in learning calculus, and acting like a pop quiz on calculus is like meeting a rock star. Then too, a nerd might like to learn but absolutely loathe having to learn in a school setting with work and people. It can also be true with children who are especially gifted. Many schools are incredibly reluctant to let gifted students skip a grade, even when they really should. For those kids, this can be frustrating in a "has the keys to a Ferrari, but forced to ride a tricycle" way. When they get to something more their speed, it can be downright refreshing. There's also the ones who're enjoying it because they get to show off and make themselves look better than their less nerdy peers.

Compare Proud to Be a Geek.

It might be caused by It's Easy, So It Sucks! just applied to school work.