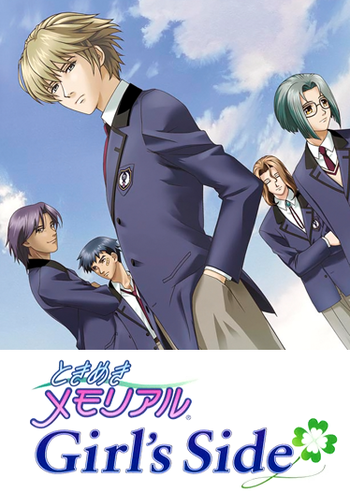 The Gender Flip version of the Tokimeki Memorial Series.

After their big economic failure from Tokimeki Memorial 3, Konami decided to step into the Reverse Harem Otome Game territory, a genre in expansion at the time, and poured in their grandest ever investment of casting the best voice actors for each character type, paired with opening and ending theme songs by Japanese rock legend, B'z, gave birth to the then first installment, now titled Tokimeki Memorial Girl's Side: First Love; released in 2002 for the PlayStation 2 with huge commercial success, leading the project to expand into two sequels, various remakes, and spin-offs; forming a franchise of its own—the "Girl's Side" branch. Its sweet, funny, and at times painful atmosphere has gained quite a fan following, with all three games' Nintendo DS versions and both versions of the third being the only TokiMemo games to date to receive complete fan translations.

Basic game play follows the same mechanic as their counterpart series—you're playing as a freshman heroine in a Japanese High School, and you'll spend your three years of school time studying, participating in club activities, working part-time, meeting other students (both male and female) and getting closer to them in the hope of getting the love confession from your intended love-interest at the place of legend of your high school on Graduation Day.

Each game's cast of characters fits neatly into a standard array of types: the prince, the studious megane, the jock, the feminine guy, the fashionable guy, the kohai, the teacher... How each type is executed varies quite a bit from game to game, giving players a wide selection of Love Interests to choose from. Obviously, there's also the Childhood Friend, normally considered the True Ending of each game.

The character sheet is here.

A similar series started up in 2013, titled Tokimeki Restaurant

* Developed by Konami's LovePlus Productions department, its licensing and distributing rights were transferred to Koei-Tecmo on August 7, 2014. Rather than a visual novel, it's instead a restaurant management game where you struggle to keep a cafe afloat with some handsome new hire employees — who also turn out to (not so) secretly be famous Idol Singers. An anime for the project was announced in 2017. Tokimeki Restaurant ended its service on August 31, 2018.

Several years after the release of the PSP port of the third game, Tokimeki Memorial: Girl’s Side: 4th Heart was announced by Konami for a 2020 release on Nintendo Switch.