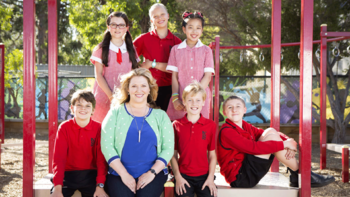 Hey what you doing, everybody's moving,
It's time for little lunch!

Little Lunch is a 2015 Australian children's comedy TV series, based on a series of books by author Danny Katz. Using the mockumentary format popularised by shows such as The Office, the show follows the adventures a number of primary school students during their 'little lunch' (also known as recess, or snack, or morning tea, depending on where you went to school), as recounted by them. The six main characters are: Atticus, Battie, Debra Jo, Melanie, Rory and Tamara, as well as their teacher, Mrs. Gonsha. The show consists of one series of 26 15-minute episodes, as well as as two specials.