Proud to Be a Geek 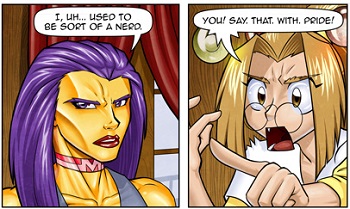 Strictly speaking, the Geek, the Nerd, and the Otaku are characters who are, well, uncool. But a rising trend in modern fiction is to show one of these character types as being downright outspoken. Maybe they missed the memo informing us that geek culture is supposed to be uncool, or maybe they think that popular culture sucks and being geeky is the best way to express your individuality in the face of a hopelessly conformist mainstream. But these are the people who are proud of their geekiness and won't hesitate to flaunt it.

In fiction, expect the outpouring of this belief to manifest in the form of an I Am What I Am, Whoopi Epiphany Speech, or at least sheer shamelessness. In real life, look more to writers and actors being open and honest about the things they do which seem, well, almost inappropriate considering how awesome and cool they are.

The perhaps inevitable outcropping of Be Yourself. Considerably overlaps with Nerdcore. The polar opposite is Closet Geek.

See also Insufferable Genius for a more negative take, where 'pride' is warped into outright arrogance and condescension towards others.

Truth in Television as most geeks are very proud of their status. As seen here,

Alternative Title(s): Geek Pride, Proud To Be A Nerd