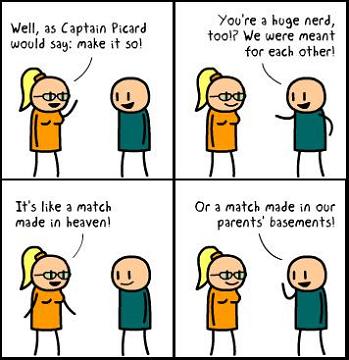 Aww...
Grace: Wood doesn't actually burn.
Joan: That's insane.
Grace: What burns is the gas released when the wood gets hot. Therefore, the reaction would have to be gasification through oxidation reduction, then combustion.
Luke: It is so hot that you know that.
— Joan of Arcadia

Geeks and Nerds are odd creatures; their eyes always reflect the pale glow of computer monitors, and their social hierarchy and organizations have puzzled anthropologists for decades.

Today we will examine one particular peculiar oddity; when choosing a mate, the wild Nerd and Geek are not as impressed with physical features, but with spectacular displays of intelligence and geeky knowledge in potential mates. Unlike in the wild, when Hollywood casts non-geeks in the role of potential mates, said potential mates will be at worst Hollywood Homely; in written fiction, they are likely Suetiful All Along.

Those impressed with such displays will reciprocate with their own call of "That's so hot," or "That's such a turn on," or "Marry me."

This reaction is achieved even if said displays are actually threats of pain, insults, technological or other, stranger things that that particular subspecies values. In the end, we may never know the full mysteries behind these magnificent beasts.

When the mating process is successful, some rigorous fluid mechanics ensues in order to grace their species with a new soul.

Alternative Title(s): Talk Nerdy To Me