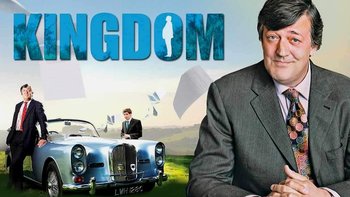 So, you sit down to watch ITV 1 on a Sunday night and the sponsored by clip is that of the channel's lower-level crime dramas, declaring that "Talk Talk sponsors ITV Mystery Dramas".
Advertisement:

Then you spend an hour watching lovely East Anglian countryside, Stephen Fry being a lawyer and no-one gets the slightest bit murdered. There's actually a lot of comedy.

Stephen Fry (10 pounds of awesome in a 5 pound bag) plays Peter Kingdom, lawyer for the small firm of Kingdom & Kingdom, in the fictional town of Market Shipborough, Norfolk. Every week, he has to investigate some argument between people over a will, planning issues or something like that. He also must deal with the town's most sue-happy citizen Sidney Snell (Tony Slattery), his long-suffering secretary Gloria Millington (Celia Imrie), and his loopy sister Beatrice (Hermione Norris).

He has a lawyer trainee with him, Lyle Anderson (Karl Davies), who is the funny man of the show, getting into the more comedic scrapes, including having to deal with about 20 cats, and getting drenched in nearly every episode of Season 1.

While at first it might seem that the other Kingdom in "Kingdom & Kingdom" is Simon (Dominic Mafham), Peter's younger brother (who has disappeared and is presumed dead at the beginning of the series and shows up again in Series 2),note and dies for real later Peter informs us that Simon is actually neither Kingdom. The first Kingdom is their late father (who naturally never shows up) and Peter is the second.

The series was cancelled after 3 series and ended with a shocker.

Not related to Kingdom (2014), a Family Drama about MMA fighters, or Kingdom (2019), a historical fantasy involving zombies.