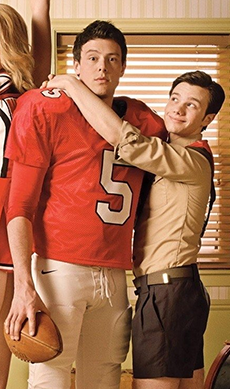 LGBT media and LGBT characters featured in media have grown in prominence the past few decades. As the visibility grew, a common romance trope was employed over and over again enough that it became cliché: A gay teenager (who is the Audience Surrogate) ranging from Camp Gay to Shrinking Violet falls in love with/actively pursues/crushes on/is paired up with a popular, muscular and (usually) closeted jock.

So many gay stories use this trope for several reasons, best written by Brent Hartinger

While a common fantasy, this trope is also Truth in Television as this kind of pairing does indeed happen in Real Life.