Film / The Half of It 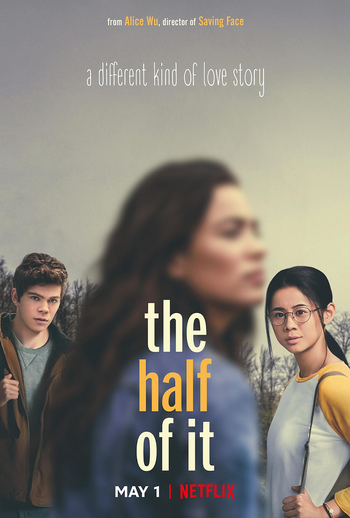 The Half of It is an LGBTQ Coming-of-Age Story dramedy written and directed by Alice Wu (Saving Face). Ellie Chu (Leah Lewis) is a shy, straight A student who feels isolated and friendless as she grows up in the small town of Squahamish. On top of excelling in her studies, she makes money by writing essays for her classmates. However, one of the jocks named Paul Munsky seeks out her help for an unusual assignment: Write love letters to Aster Flores, the girl he secretly has a crush on. But after meeting Aster herself, Ellie realizes she also has a crush on her. Needless to say, this love and friendship triangle is a more complicated task than Ellie bargained for.

The film was released on Netflix on May 1, 2020. The trailer can be found here.

Not every love story is a romance.