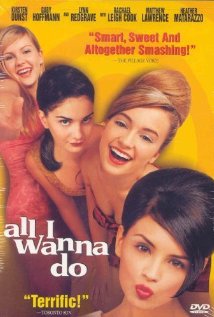 The Hairy Bird (also known as Strike! and All I Wanna Do) is a 1998 teen comedy film written and directed by Sarah Kernochan, with a cast including Gaby Hoffmann, Lynn Redgrave, Kirsten Dunst, Monica Keena, Heather Matarazzo, and Rachael Leigh Cook.

In 1963, Odette Sinclair (Hoffmann) is sent by her parents to Miss Godard's Preparatory School for Girls, an elite New England boarding school run by Miss McVane (Redgrave), after planning to lose her virginity to her boyfriend, Dennis.

Odette meets the dynamic young women of the DAR, Daughters of the American Ravioli — Verena (Dunst), Tinka (Keena), Theresa a.k.a. Tweety (Matarazzo), and Maureen a.k.a. Momo (Merritt Wever) — and they become friends. The girls get together to eat stolen canned food, mock upright hall monitor Abby (Cook), and share their most secret desires — and then pledge to help one another achieve them, no matter what the cost. One night they find out that the school is going co-ed, joining St. Ambrose Academy, due to lack of funding. Once it's proved that the boys can't be trusted, the girls mount an elaborate scheme to stop the boys’ invasion, hoping that they can save Miss Godard's from becoming "Miss Gonads".

The movie is based loosely on writer/director Kernochan's experiences at real-life Connecticut girls' school Rosemary Hall around that time.

Alternative Title(s): All I Wanna Do