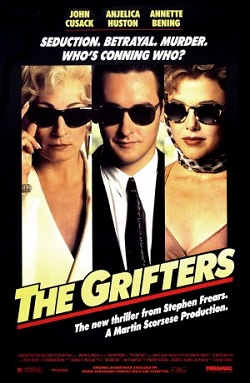 When con artist Roy Dillon (John Cusack) is visited by his mother Lilly (Huston), who is also a con artist, she sends Roy off to the hospital because of a blow to the gut he suffered while working a grift. Roy's girlfriend, Myra Langtry (Bening), the third con artist, comes to visit Roy, and we discover that Lilly and Myra don't get along. After he is released from the hospital, Roy and Myra go on a little trip, where he is propositioned to be partners in crime with Myra. Everything soon falls apart for the three con artists, which leads to a bloody climax.